The absence of ice and snow Dec.-early March denied Maryland a winter wonderland, but landed the Striders plenty of wins and outstanding performances.

First of all, winter caps off to Hannah Cocchiaro and Caroline Bauer, who earned the honor of competing in the U.S. Olympic Trials in Atlanta on February 29!!! Battling brutal hills and gale winds, Hannah placed 61st out of more than 400 women with a time of 2:42:02 and Caroline came in 210th at 2:49:20. Family, friends, and fellow Striders members were on hand to witness this historic event!

Julia Roman-Duval qualified for the trials as well, but held out in order to compete the same weekend in the Paris Half Marathon, aiming for a shot on the French national team. Unfortunately the event was cancelled only the day before due to concerns about the spread of the coronavirus.

On Feb. 9, Kevin Ford also competed in the Rock n Roll New Orleans Marathon, earning 2nd place in M30-34 and 4th place overall male with a time of 2:44:21. Adam Sachs earned a PR at the California International Marathon on with a time of 2:40:19.

At our own RRCA Club 10-Mile Challenge on Feb. 23, both the men's and women's teams navigated the hill-crazy course under sunny skies (finally, after two years of cold downpours) with strong representation and standout performances. Special congrats to Selvi Rajagopal, who came in first overall on the women's side with a time of 1:00:34!

Results were as follows:

The Trials of Trail Running

Conrad Orloff competed in the USATF Club Cross Country National Championships, a 10K, with a time of 37:00, while Tammy Liu Hermstein finished off 2019 with a bang at the Running Out of Time 10K on December 31st, taking 2nd overall woman with a time of 47:48.

Debbie Cohen, our oldest and slowest runner (yeah, that's me) came in first overall woman at the PGRC Wright Stuff 8K on Dec. 7th with a time of 43:28. Seven Striders racers did Turkey Trot 5 Ks and 5-milers on Nov. 28th, with results as follows:

And of course, we had massive representation AND success at the Celtic Solstice Five Miler on Dec. 14th-see our super stats below!

Great job, everyone! Let's stay strong and healthy through Spring with nothing more serious than a case of Corona (the beer, that is)!!!!! 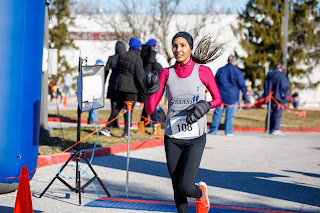 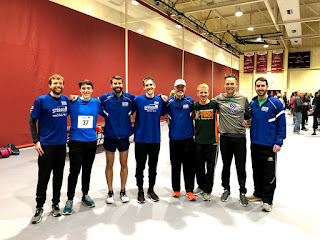 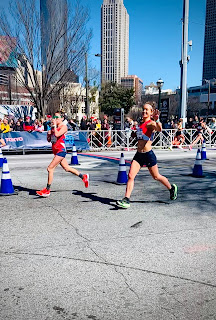 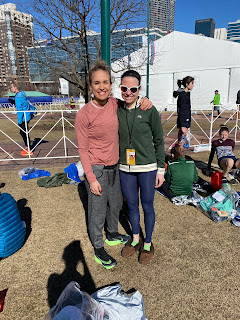 Hannah Cocchiaro and Caroline Bauer after their awesome performances in the U.S. Olympic Marathon Trials in Atlanta. 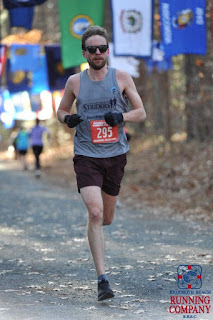 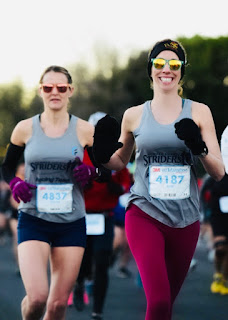 Lindsay Pickett and Rachel Collins at the Houston 3M Half Marathon. 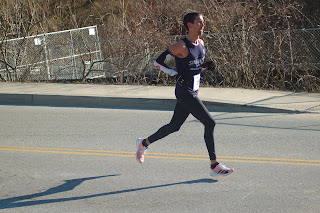 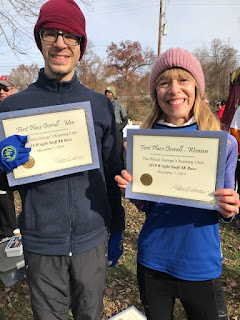 It's been an active Fall for members of the Howard County Striders Racing Team, with strong placements and multiple awards in races of all distances!

It was an eventful and record-breaking marathon season for many, with the following results:

In Half Marathon news:

On Oct. 5, Lindsey Pickett sped to a PR and a first place finish among all women in the Great Allegheny 15K at 1:01:27, and Rachel Collins was not far behind at 1:05:56, with a 3rd place overall finish, PR and award for 1st place female master.

In the 5 mile category, Eric Schuler took second in the Octoberfest 5 miler at 29:03 and Mark Landree was 4th overall and first male master at the Downs Park 5 miler at 27:48.

Gaining entry into the Boston Marathon got five minutes minus another minute and 41 seconds harder than in the past several years, based on the new time tougher standard and extra cushion needed to qualify for 2020. Racing team members registered for the event, being held on April 20, 2020, include Jason Tripp, Tunde Moraykino, Deb Taylor, and Debbie Cohen (those are all I know about). Who else is going?


HAPPY WINTER WEATHER RUNNING TO ALL!!!!! 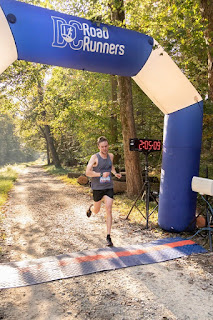 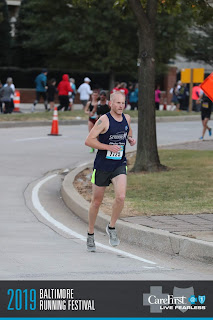 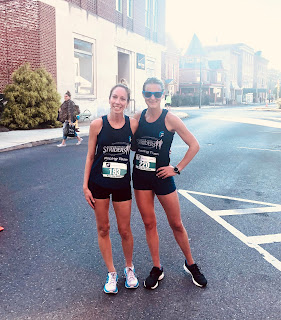 Rachel Collins and Lindsay Pickett at the Great Allegheny 15K. 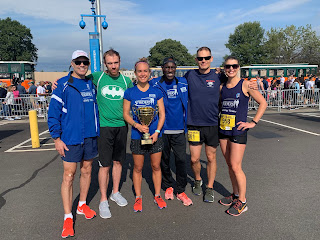 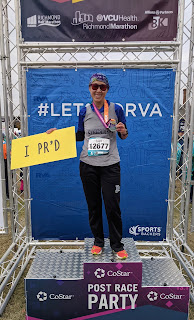 Faye Weaver at the Richmond Half Marathon 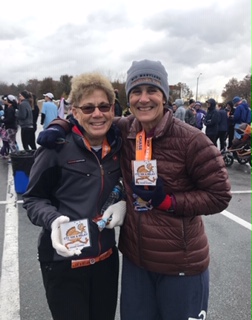 Deb Taylor and friend at the Turkey Chase 10K. 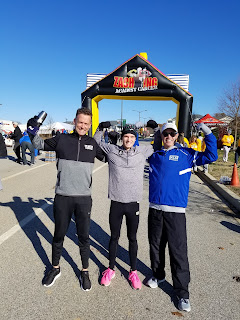 Jason Tripp, his son Will, and Ed Wilson at the Zaching Against Cancer 10K. 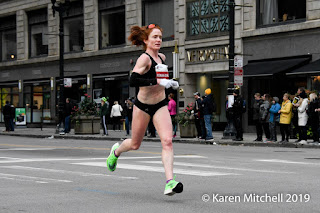 Julia Roman-Duval at the Chicago Marathon

Posted by Debbie Cohen at 12:48 PM No comments:

One of the hottest and most humid summers on record was no match for Striders racing team members, who logged some epic race times, wins and PRs from late June through mid-September.

Since our last blog post, which chronicled races up to the Women's Distance Festival, Striders racers have represented at 20 races!! The first group included:

Our presence was also strong at the Annapolis 10-miler on August 25th, with much more favorable temps for the season. Julia Roman-Duval took first overall female with a time of 57:47, while Caroline Bauer earned 2nd place with a time of 1:01:37. Other A-10 highlights included:

The Parks Half Marathon also saw a lot of strong performances, wins and PRs by Strider racers, including:

All in all, Spectacular Summer, Folks! 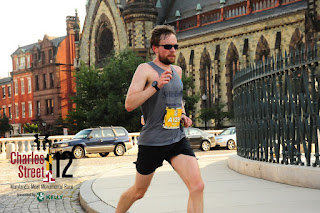 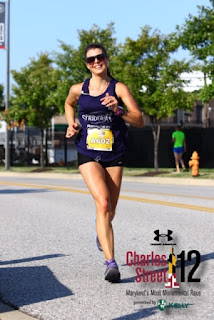 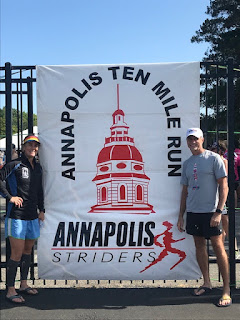 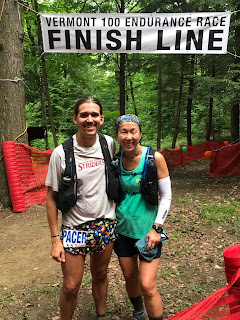 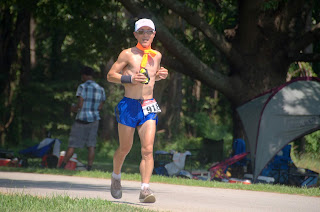 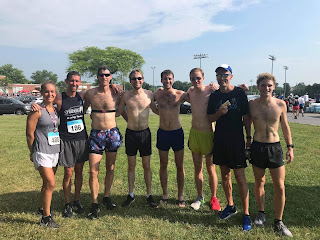 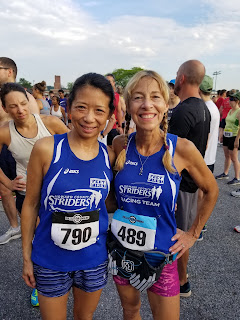 Tammy Liu and Debbie Cohen at the Arbutus Firecracker 10K

Posted by Debbie Cohen at 5:58 AM No comments:

Striders racers have taken advantage of a cooler than usual late spring/early summer to wrack up strong performances and awards at several area races.

Other Striders non-racing team members also won a host of awards, and special thanks are due to the first-time co-race-directors of this event, the dynamic duo of Samantha Scherr Kieley and Emily Fleming Howe!! 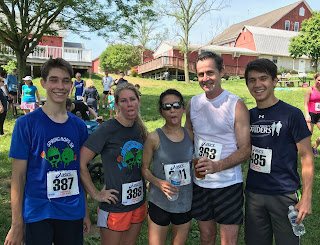 Tammy Liu with family and friends at the Spring Hops 5K 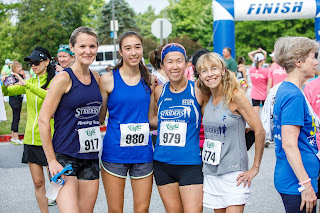 Posted by Debbie Cohen at 7:32 AM No comments:

Spring weather in Howard County has been anything but consistent, but our racing team has consistently racked up wins and solid performances in races big and small, near and far.

Battling weather conditions that ranged from cold to rainy, windy, and hot, Striders racers stayed BostonStrong at the 123rd Boston Marathon on April 15.

Also on April 28, Julia Roman-Duval proved her mettle across the Pond, coming in 23rd overall and 3rd among all non-elite females in the London Marathon with a time of 2:37:15!!!!!

And Faye Weaver bounced back from Boston to the iconic Big Sur Marathon (Boston to Big Sur) with a time of 3:38:20.

In April, we also welcomed Louise Valentine to the Development Team and Callie Betman to the Elite Team.

Congrats to everyone for a stellar Spring so far - we can't wait to see what May brings! 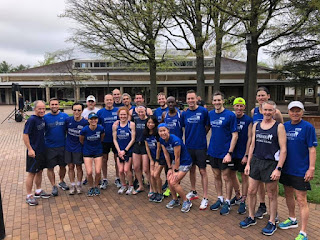 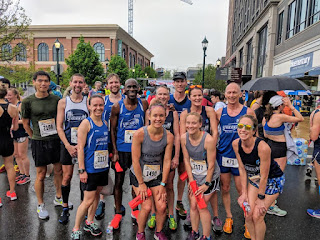 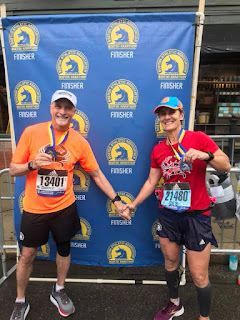 
Posted by Debbie Cohen at 7:05 AM No comments:

The Howard County Striders Racing Team has clocked some impressive performances so far this year! Tackling the notoriously roller-coaster steep hills in the cold, pouring rain, many racing team members had strong finishes in the RRCA Club Challenge 10 Miler. Held on February 24 at Howard County Community College, this annual race draws tough competitors from all the running clubs in the Maryland/DC area. There were a lot of no-shows due to the cold driving rain, so just showing up meant you had to be tough, which we were! The Howard County Striders Racing Team came in second of all clubs represented on both the women's and men's side.

Other team scorers not previously mentioned included, in the overall co-ed category:


In the master category:

And in the grandmaster category:

Louise Valentine also scored in the under 40 female category (all other under 40 males and females who scored in this category have already been noted in other categories).


In March, Striders racing team representation--and performance--was phenomenal at the Under Armour Kelly Shamrock 5k in Baltimore March 9th, with the following results:

Other race highlights from January 1 to March 15 included:

Posted by Debbie Cohen at 5:33 AM No comments:

The Howard County Striders Racing Team has started off the new year with some great performances! The biggest early race was the RRCA Club Challenge 10M, held last weekend in Columbia. The annual race is a team competition between all the running clubs in Maryland and DC. Here are some highlights from the race:


Although there aren't many races throughout January and February, some racing team members found some to test their fitness. As the weather gets warmer, expect to see racing team members at a variety of races. Coming up in March, there is the KELLY Shamrock 5K in Baltimore. Team members will also compete in the Boston Marathon, Clyde's 10K, and Pike's Peek 10K in April.
Posted by Eric at 9:41 AM No comments: